The most important improvement brought about by Syncplify.me Server! version 5.x is the simplicity with which you can create a true active-active high-availability (HA) set with it.

In fact, as of version 5.x, you don’t have to deploy a database replica-set anymore, which is hard to do and requires at least 5 virtual machines (2 for the SFTP nodes, and 3 for the database); Syncplify.me Server! version 5.x can achieve a totally fault-tolerant, active-active, highly-available deployment with just 2 virtual machines!

Of course, Syncplify is in the secure file transfer business, not in the networking business nor in the storage business, so you’ll have to provide the networking and storage components yourself, but this is also true with any other SFTP server on the market.

So, without any further ado, let’s dig in.

If you do have a Load Balancer, we definitely recommend you use it. In such case your deployment will look somewhat like this:

If you don’t have a Load Balancer, you can still achieve a remarkable level of High Availability by creating multiple “A records” on your DNS associated with the Host Name of the FTP/SFTP server, and configuring your DNS to provide round-robin responses. Clearly, unlike the Load.

Balancer, your DNS will not be able to probe your SFTP nodes to see if they’re alive, but it will direct all client connections equally to both nodes, de facto spreading out incoming traffic just like a load-balanced HA would. 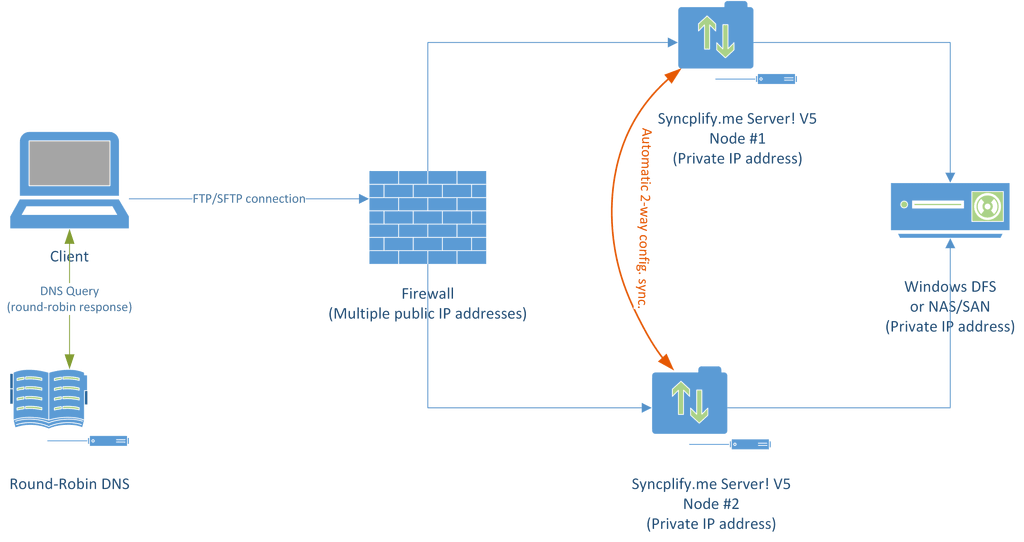 It is important to understand that in both of the cases shown here above, it is still your responsibility to provide shared storage to all SFTP nodes. In our charts, we show this can be a Windows DFS (our favorite choice) or a NAS or SAN of your choice. It can also be any network file system that your Windows-based SFTP nodes can access natively (for example, an iSCSI Target is perfectly fine).